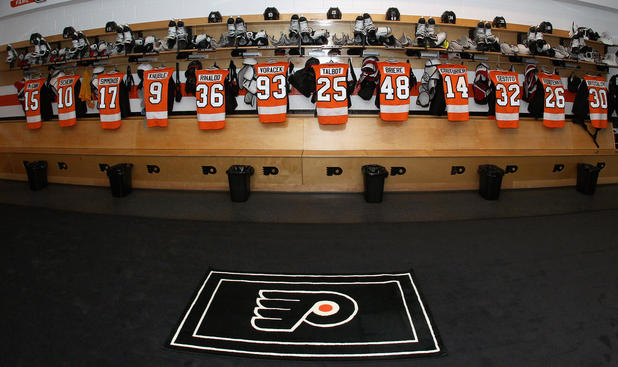 Throughout the course of my internship at the Flyers, I have been lucky enough to meet many intelligent and successful adults, all of whom have inspired me and impacted me greatly in some way. Some of the people who have specifically impacted me are Bob Kelly, Tim Jones and also Rob Johnson.

Bob Kelly is a former player of the Flyers. He is probably the nicest and most down to earth man I have ever had the pleasure of meeting. Although Bob is no longer a player for the Flyers, he is still an active and positive member of the organization. Today, Mr. Kelly shares his experiences and intelligence by going to different school assemblies and talking to children. Most of Bob’s presentation consist of him talking about his experience as a two-time Stanley Cup winner. He also talks about teamwork and positive characteristics that a good teammate obtains. Not only does he teach the kids the importance of teamwork but he also discusses with them the importance of individuality and being your own positive leader. Knowing that Bob takes the time to reach out to young children is very inspiring. As an athlete and an intern, I envy all of his hard work and dedication throughout the years. I also appreciate his continuous positive attitude in the office, he always seems to lighten the mood.

Another individual who has impacted me greatly is Mr. Tim Jones. Mr. Jones is currently the partnership
development coordinator for the Flyers. Tim was hired in December and has since then had a huge and positive impact on the office. Tim inspires me with his work ethic and positive attitude. Throughout the course of this internship, Tim has been my supervisor and he has been a huge help in this learning experience. I envy him for making a name for himself so quickly and helping to jump start the department that is now such a prominent part in the organization.

The last person who has inspired me throughout this journey is Rob Johnson. Although I have not had the opportunity to know Rob as well as Tim, it has been an honor to be able to work under such a successful man. Rob is the Vice President of the business development department here at the Flyers. Just this past year Rob was mentioned in Philly Magazine as being one of the most successful businessmen under the age of forty. Rob has inspired me by becoming so successful for such a prestigious organization. I can only dream that one day I too will be as successful and prominent of a figure as Rob.

Everyone who I have met throughout this journey has had some sort of impact on me whether it be big or small. I am beyond grateful for this experience. I look forward to using those who have inspired me as motivation for the future. I can’t wait to take everything I’ve learned here at the Flyers to my next job some day.

“Take a chance, step out of your comfort zone”

POV: The PR World as Seen From an Ad Major